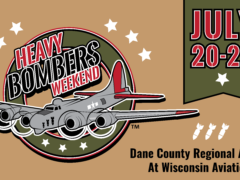 Madison, WI, May 7, 2018 (Newswire.com) – ​​In a sixth annual gathering of World War II era aircraft, EAA Chapter 93 is hosting the recently restored WWII B-29 bomber “Doc” along with the EAA Boeing B-17G “Aluminum Overcast” in Madison, Wisconsin at the Dane County Regional Airport the weekend before EAA AirVenture. A beautifully restored 1937 DC-3 airliner from the Flagship Detroit Foundation will also be appearing at the event. Each of these aircraft will offer rides for sale to the public.

The event will be held on the east side of Dane County Regional Airport at Wisconsin Aviation, 3606 Corben Court, Madison, Wisconsin.  Admission for the 3-day event which runs from 9:00 a.m. to 5:00 p.m. Friday, July 20 through Sunday, July 22 is $15 per individual, $25 per family. Admission for veterans and active military personnel is $10. Children under 8 are free with a paying adult. Payment of the admission fee gains access to the event for all three days. Ground tours for all aircraft are included in the admission fee.

In addition to the B-17, a collection of experimental aircraft will be on display, and other World War II era warbirds will make an appearance at the event.

A Bell 47 helicopter will also attend and be available for rides.  The cost of a helicopter ride is $45 per passenger. Tickets can be purchased in advance at https://sierra.ticketleap.com/madison-wi/

Ride reservations for the DC-3 can be made at  www.flagshipdetroit.org

Ride reservations on the B-17 are recommended and can be made online at https://www.eaa.org/en/eaa/flight-experiences/aluminum-overcast-eaa-b-17-bomber-touror by calling EAA reservations toll-free at (800) 359-6217. The price is as follows:

All airplane and helicopter rides are weather permitting.

About the B-29 Superfortress “Doc”

Doc is a B-29 Superfortress and one of 1,644 manufactured in Wichita during World War II. Since 1987 when Tony Mazzolini found Doc on sitting and rotting away in the Mojave Desert, plans have been in the works to restore the historic warbird to flying status to serve as a flying museum. Over the past 15+ years, hundreds of volunteers have worked on Doc and the restoration project. Skilled workers and retirees from Boeing and Spirit AeroSystems, veterans, active duty military and others wanting to honor those who served, have spent tens of thousands of hours on Doc’s restoration. Countless individuals and organizations also made financial and in-kind contributions to keep the project going.

About the EAA B-17 “Aluminum Overcast”

EAA’s B-17 “Aluminum Overcast”is more than just an airplane. It is a living tribute to the brave individuals who served, sacrificed, and, in many cases gave up their lives defending freedom during World War II. It is a connection to the past and the Greatest Generation who built and served historically on these magnificent warbirds.

EAA’s B-17 tour takes “Aluminum Overcast” around the United States, providing people of all backgrounds with the chance to remember and honor the men and women of WWII who either served on or worked to maintain and build this amazing aircraft.

“Aluminum Overcast” is one of only 12 airworthy B-17s remaining today.  Since EAA began tours of the B-17 in 1994, tens of thousands of people have experienced this unique airplane through its flights and ground tours. Known as The Flying Fortress, the B-17 bomber is considered one of the greatest military airplanes ever built and one of the best-known aircraft types of the World War II era.

About the Flagship Detroit Foundation DC-3

NC 17334 was manufactured in 1937 and was the 21st of American Airline’s fleet of 84 Douglas DC-3 aircraft operated from 1936 to 1947. American accepted the Detroit delivery on March 2, 1937. This aircraft has the distinction of being one of the oldest DC-3s in the world. The Flagship Detroit DC-3 was located in Virginia, and purchased by the Flagship Detroit Foundation in August of 2004. The Foundation goal is to continue to operate and maintain this aircraft as a flying tribute to all of American Airlines employees, past and present. By displaying the historic aircraft at various airshows throughout the country, the Flagship Detroit Foundation hopes to foster a continuing awareness of the significance of this era of American aviation. We invite all interested parties, especially American Airlines alumni to share this beautiful aircraft with us and with the next generations of young aviators.

Whether you fly, build, restore or simply enjoy airplanes and aviation, you are welcome to attend Chapter events and join our Chapter located in Madison, Wisconsin.

Chapter 93 is a group of aviation enthusiasts, aircraft builders, and pilots who get together with like-minded people to share ideas, exchange information, encourage safety, serve the local aviation community and have a lot of fun doing so.

For more information on EAA and its programs, call 800-JOIN-EAA (800-564-6322) or go to www.eaa.org. For continual news updates, connect with www.twitter.com/EAAupdate.